With the 2007 holiday season now past, millions of people will be snapping hundreds and thousands of pictures with their shiny new digital cameras they got for Christmas. Heather and I both have Canon digital SLRs and although we're not professional photographers, we had a huge problem that will soon befall many digital camera owners:

Where the heck do we store, protect and effectively organize our photo libraries?

Our collection started off innocently enough - With loads of hard disk space (100GB), we stored each photo on our respective laptops. If I wanted a photo of Heathers, she would put it on a memory card and I would copy it to my laptop. We quickly outgrew this method of photo sharing for a few major reasons: duplicate photos, missing photos and inadequate storage space. To complicate things, I'm a Mac user and Heather uses Windows. We had an interim method for sharing photos: I would be the "keeper" of the photos on my Mac using iPhoto, but I quickly started to use up my hard drive space and since all of my photos were on my laptop, it become a single source of failure in the event it was stolen, or the hard drive failed. Another challenge was that iPhoto doesn't exist for Windows, so we had to find something for her too. Finally, after much thought and evaluation, I've found a solution that works. Store your photos in a central location One of the biggest challenges with a photo collection is keeping them secured in a central repository. The device that stores your photos should be redundant in the event of a failure and protected from electrical surges using an uninterrupted power supply (UPS).

To answer the call for a centralized repository, I purchased a 1 terabyte Hewlett Packard Media Vault to store all of our photos. The Media Vault is network attached storage device that supports gigabit network access and hard disk mirroring. With 1TB of capacity, mirroring the hard disks effectively gives me 500GB of redundant storage. My configuration (2x 500GB drives, plus the Media Vault) will probably run you about $650. The Media Vault is based on the Linux operating system and an argument could be made for building a linux or windows based computer to do the same job as the MediaVault, but I liked the simplicity of the HP device. I think many average photographers would rather have a dedicated, no hassle appliance as well. In the event of the Media Vault suffers a physical hard drive failure, I know that my pictures will be safe and sound on the other hard drive (since they're running in a mirror). Every so often, I back-up the entire NAS to dual layer DVDs (labeling them by month/year) or to an external Firewire hard drive. That's the storage side of things taken care of, as long as my photo collection is under 500GB. After that, I need a larger capacity NAS at which point, I'll probably go 5TB RAID level 5, but they're a bit pricey at the moment. Use a Standard Naming Convention and Directory Structure As I write this, my photo library is about 40GB. Each photo is approximately 2-3MB and I have just over 9,000 photos. The library is expanding rapidly now that Heather and I started making "photo outings". When it comes to physical directory structure, it took me a while to find something that works. In the end, I came up with a way that's simple to maintain and enables me to find photos quickly. Below is a screenshot from my Media Vault that shows the folder structure from January through to July 2007, with July's folder structure expanded: 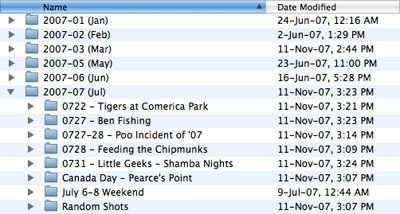 Using the above photo as an example, here are a few rules I go by when copying my photos to the NAS: My photo collection goes back to 1999 using this naming convention and I've found it to be surprising scalable and easy to use, even without a fancy photo management application. You can't underestimate the importance of a good photo management application like iPhoto, Aperture or Adobe Lightroom, but the first step in having an organized photo library is to build a directory structure and naming convention that works. When I have some more time, I hope to write about some of the applications that you can use to connect to your NAS and manage the rest of your photo workflow. If you have any comments or suggestions on this article that you think might be helpful, please let me know! I'm an amateur photographer and I'm always looking for ways to improve what I do. Let me sign off with a photo of the now famous Haliburton Poo Incident of '07: 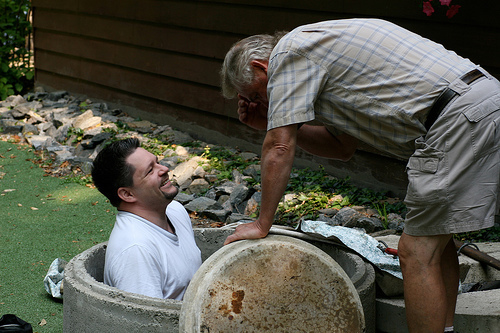 That's me in the septic getting ready to pull out the ejector pump (guess what THAT does). I think we were laughing so hard because of the smell and I was probably getting told to "get back down there" by Mike, a good friend of the family.