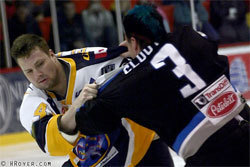 At dinner this evening, I was telling Heather that as a child, I would see a hockey fight break-out on the television and think the players were complete idiots. If I was about to get my butt kicked around the ice from a player on the opposing team, you can bet the last thing I would do is throw away such a perfectly crafted weapon. As adults we know what the rules are, but as an 8 year old Chuck Norris fan, I had a hard time believing that people would willingly put down their hockey sticks and throw down the gloves so they could punch each other as hard as they can in the face. And another thing... if you leave your gloves on, it won't hurt so much when you punch a guy's helmet either, you knuckleheads.